This morning I woke to some (to me) unwelcome news: that the UK had voted itself out of the EU. This afternoon, I drove to Coventry to pick up my Inspiration Award for Looking at the Stars (in the Hooked On Books category for ages 9-12). It was a lovely event, with lots of amazing students from different schools, all passionate about books. I also met William Hussey and Simon Rickerty, who won the YA and picture book categories respectively.

Before the awards were presented, each book was introduced by a selected group of students. I was blown away by the students from President Kennedy school, who acted and danced their way through the story of Looking at the Stars, right up to the arrival at the refugee camp! Thank you so much to the students and teachers (and their librarian, of course!) who were involved in putting this together; I gather it took three months to rehearse! I was very, very touched. Thank you also to the amazing staff of the Coventry Library Services, who give up their spare time to make this happen. 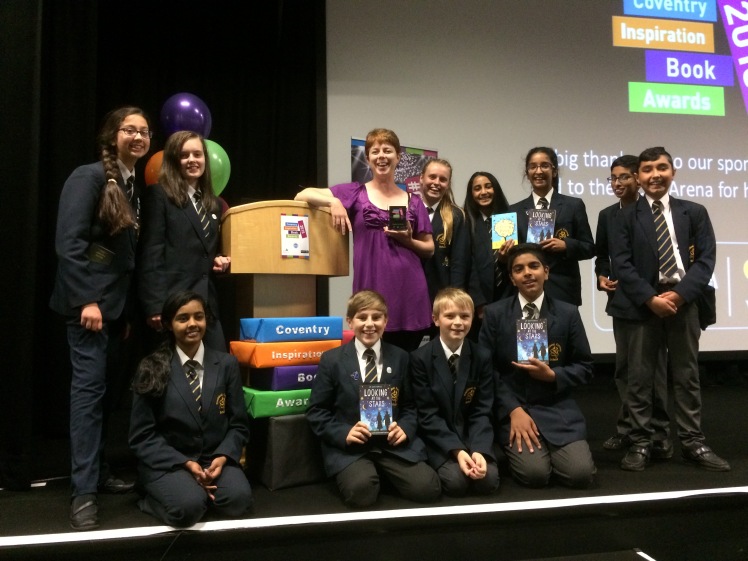 I was invited to make a speech on receiving my award. Looking at the Stars deals with a family caught up in the collapse of a country; of neighbour against neighbour; of distrust of refugees, fear, starvation, and war. It also explores the themes of hope and storytelling in times of despair. I felt, given the political events of the day, that I could not avoid mentioning them in my speech, as they rang so chillingly apt. I felt this even more strongly as I looked out at the hall, filled with children from all kinds of backgrounds and cultures. Children who, today, may be feeling a little less safe in this country.

This is the speech I gave, and I stand by every word.

But today I want to talk about the importance of asking questions. Kids are really good at asking questions. Amina in Looking at the Stars asks questions all the time – questions that sometimes get her into trouble. Yesterday, there was a vote in this country, about whether we wanted to stay in the European Union or not. The EU is like a big club of countries. You know what it’s like when you’re in a club: you don’t always get on. People sometimes keep secrets, or have arguments, and it’s not always easy. But the point of a club is to work together for a greater good – and yesterday the people of England voted us out of the club.

I’m not here to talk about whether this was the right or wrong decision, though you can probably guess which way I voted. I just wanted to talk about questions. Because some of the people who voted yesterday did so because they believed lies. Just as the Kwana in my book manage to turn neighbour against neighbour by making them wear letters of heritage, some very powerful people in this country have managed to turn many of us against immigrants, blaming them for our country’s problems.

This country is struggling because of lots of things, but refugees and immigrants are not one of them. But humans are very good at dividing themselves up: by race, by education, by accent, by gender: if there’s a way to point out our differences and alienate a group, we’ll do it. And so when the papers shout about our borders being overrun and politicians use words like ‘swarm’ to describe frightened, helpless people…sometimes those who read and hear don’t stop to ask, ‘Is this true?’ And it’s very important that each of us takes responsibility for our own actions. Ask questions. Don’t believe everything you read and hear. The decisions you make should be based on truth, not lies.

I want to apologise to you today. Because I feel as an adult that we’ve let you down. There are lots of things in the future that you might not be able to do because of the decision grown-ups have made. And no one really knows how things will turn out – but you guys have voted for my book. And that means that you can see beyond the lies and the divisions. You can ask questions. You can put your hand up and ask, ‘But why are you saying this?’ You can demand, ‘Show me facts that back up your opinions.’ You can think for yourselves. Keep asking questions.

Whatever direction our country takes now, you are our future. And that gives me a lot of hope, because I know that young people are, more than ever, inclusive, accepting, forward-thinking and outward-looking. Be Amina. Be thinkers. And never, ever, stop asking questions.