It’s been a CRAAAAZY week! I started my events on Tuesday, when Cathy Brett and I did some Electrigirl workshops at Burford School (where I’m patron of reading)

Then on Thursday, I spent World Book Day itself with the students of Rye St Antony in Oxford, who were fab and really enthusiastic. Huge thanks to the librarian Florence, who also organised the most beautiful bunch of flowers for me! 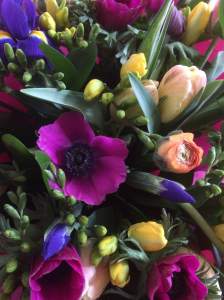 Then on Friday, I drove over to Chipping Norton to help out with the lovely booksellers Polly Jaffe and Patrick Neale at the Biggest Book Show On Earth – starring three of my lovely author pals: Katherine Rundell, Cavan Scott and Steve Cole. Also on the bill were Julian Clary, David Roberts, Steven Butler and debut author MG Leonard, who taught us facts about beetles I won’t forget! Here they are after the second show (they worked very hard to engage 600 children over two shows!)

And as if that wasn’t enough fun for one week, yesterday I toddled along to the first ever Oxford Comic Con, where OUP had a book stall, and Cathy and I were invited to do an event!