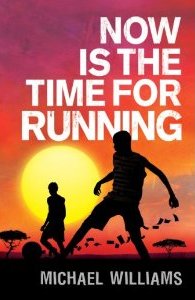 This is one of those books in which the location is almost a character of its own. Fourteen-year-old Deo and his older brother Innocence live in Zimbabwe, but their lives are changed forever when soldiers come to their village and massacre everyone. Suddenly the two brothers are forced to run – to South Africa, where they have been told they will be safe.

I was particularly interested in this book because the plotline is similar to my own LOOKING AT THE STARS. Two brothers have to journey to find refuge after civil war destroys their old life. (I have two sisters in my book, but otherwise the basic idea is the same.) Deo has to take charge because Innocence, despite being older, was brain-damaged at birth and retains the intellectual capacity of a child. It’s a lot of responsibility for Deo, and the story pulls no punches in describing the harsh nature of their journey.

The two brothers are bound together by genuine affection, which is appealing to the reader. And yet at the same time, I found myself often thinking of OF MICE AND MEN, by John Steinbeck, a book I know very well. The two central characters in that book, George and Lennie, are also bound together by genuine affection and interdependence because Lennie (although not related to George) is also mentally impaired and looks to George to tell him what to do. Because of the similarities, I had a sense of foreboding about NOW IS THE TIME but I shan’t tell you whether I was right to worry because it would spoil the end!

I enjoyed NOW IS THE TIME FOR RUNNING but I read it over a couple of weeks where my reading time was sporadic, and I think that affected my ability to connect with the story. I found it hard to stay engaged – but perhaps that’s also because the storytelling style is very narrative and plot-driven. As a reader, I like to see interactions with characters in which you see below the surface of the actions and words. Deo and Innocence were certainly stand-out characters, but I would be hard pressed to remember the others very clearly.

Deo and Innocence love football (soccer, that is) and Deo’s talent with the ball is what we know will give him a future. The book ends in a way that I found slightly surprising but also uplifting. And the sense of culture and country is palpable. The message from the book? That we should all be just a bit less judgmental and prejudiced about others, no matter where they are from or how different they are. And that is a very important message indeed,