Oh my goodness, Friday was SUCH an amazing day! Along with fellow shortlistee Philip Reeve, I went along to the East Wintergarden in Canary Wharf for the Finale of the Tower Hamlets Book Awards.

I was thrilled just to be on the shortlist, to be honest. Many of these authors have already won big awards, and I didn’t really think my ‘quiet’ book about friendship, grief and books would stand a chance.

Pupils from 33 different primary and secondary schools attended, and there was such a buzz of excitement! Eight of those schools had prepared dramatic presentations of the shortlisted books, and Philip and I had the hard task of selecting a winner! In the end though, we felt that Blue Gate Fields Primary’s combination of amazing costumes, animated video and excellent acting in their interpretation of The Wolf Wilder took them to the top 🙂 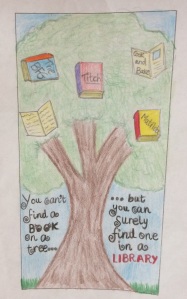 At the back of the room, along with the fabulous Brick Lane Bookshop, there was a big display of art work based on the shortlisted books. I was blown away by the creativity and thought put into it! These were some of my favourites, based on my book (click on the poems to make them bigger).

This was my favourite though, from Amisha – isn’t it stunning! And to my huge delight, she let me keep it! It now has pride of place in my study 🙂

And then the winning book was announced…and it was MINE! I can’t tell you how astonished I was! I made a rather incoherent speech, and was presented with a lovely framed certificate. Then I signed LOADS of books for very excited children, and eventually made my way home, still buzzing. What a fantastic, fantastic day. Thank you so much to the children of Tower Hamlets and the staff who made it all happen.