I can’t believe I haven’t reviewed one of these books on my site before. Maybe it’s because I’ve spent all my time telling people I meet to buy them! The Stinkbomb and Ketchup-Face series has caused more bedtime merriment in this house than any other. My seven-year-old literally squeals in delight, and I have been forced to stop reading on many occasions because I’m laughing so hard. John Dougherty – a good friend (so I am naturally biased) is a comic genius. It’s SO hard to do a funny book for kids that the parents are equally keen on.

Stinkbomb and Ketchup-Face are brother and sister, and they live in a house high on a hilltop above the village of Loose Chippings on the island of Great Kerfuffle. The island is ruled over by the benevolent King Toothbrush Weasel, who lives in a cottage palace, and it’s guarded by the army of Great Kerfuffle, a cat called Malcolm the Cat. The villains of the piece are the badgers, who are keen to do Evil and Wicked Things, though they’re a bit incompetent (apart from Harry the Badger, who’s the brains of the outfit), and are easily caught in each book and thrown in jail. The increasingly ingenious (and hilarious) ways to find ways to escape are one of the attractions of each new book; and I particularly liked the escape method in the Bees of Stupidity, involving a hard biscuit and some patient nibbling… 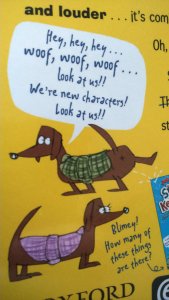 My daughter adores the anarchic characters (which also include an extremely rude blackbird and a sweet and helpful shopping trolley that Ketchup-Face has adopted as her pet ‘horse’ Starlight) and I and my husband appreciate the cleverness of the writing. John frequently reminds the reader that they are in fact reading a book (in an earlier book, an elephant objected to being pressed into a job, ‘because I’m needed in Chapter 28’), a stylistic device that could be annoying but somehow isn’t. We also loved the new characters, dachsunds Ziggy and Wiggo, who claim to be badger ‘experts’ but simply jump on anyone (or anything) they meet, barking ‘Badger Badger Badger!’

In this book, the fourth in the series, a series of break-ins have resulted in the theft of stripy jumpers, fairy wings and the badgers themselves. You can see where this might be heading…and so could my daughter, which made it all the more delicious for her. Stupidity, in case you’re wondering, is the name of another village on the island (you can go there by bus in Book 2: The Quest for the Magic Porcupine, though the journey does take you via the Mountains of Doom and the Valley of Despair). Stinkbomb and Ketchup-Face, once they’ve been reassured that they are in fact the heroes of the story again and haven’t been relegated to minor characters, set off to thwart any Evil and Wicked plans that might be afoot.

David Tazzyman’s illustrations perfectly capture the surreal, anarchic style, and I wonder how he feels when being asked to draw some of the things that John comes up with…I won’t spoiler it, but this picture was particularly brilliant, and so was the one that followed immediately afterwards!

If you’ve got kids aged anywhere between six and twelve, I reckon they’ll love this. The younger ones can be read to and will just laugh at the crazy plot, hilarious characters and brilliant pictures. The older ones will appreciate the zany authorial interruptions and the cleverness of having your characters clearly aware that they’re in a story.

Be warned though, if reading aloud, your full range of voices and accents will be tested. In book 1, there’s a song called Blueberry Jam that you WILL be required to attempt (no song in this one, John, what’s THAT about?!) and in this one, there’s almost a page of quacking required…

I’m absolutely delighted that there’s more to come from Stinkbomb and Ketchup-Face, and, judging from the way my daughter’s eyes lit up when she saw the latest, she’ll be eagerly awaiting the next one too.

The previous books, The Badness of Badgers, The Quest for the Magic Porcupine, and The Evilness of Pizza, are all available now, and The Bees of Stupidity was published just yesterday. Congratulations to John, David and the team at OUP for another brilliant book!