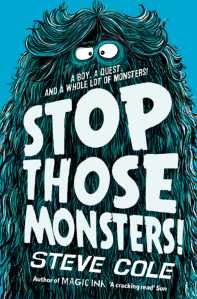 I’ve been looking forward to Stop Those Monsters! since reading Steve Cole’s Aliens Stink! last year and enjoying it far more than I was expecting to. Stop Those Monsters! is another take-a-boy-out-of-normal-life-and-shove-him-into-a-parallel-world story. This time we have Bob, a 12-year-old boy being babysat by Rachel Thing (he can’t remember her surname) when his house is caught up in a whirlwind and thrown, not over a rainbow, but down into the depths of Terra Monstra, the underground world populated by monsters.

Bob falls out of a window on the journey, and lands upside-down in a tree, stared at by astonished (and frightened) monsters. Humans don’t come down here, you see. Besides, we have a fearful reputation. Partly for over-populating the world and destroying natural habitats, but mainly for firing toxic waste out of our noses. Monsters, it seems, suffer from the same xenophobic delusions as many people… 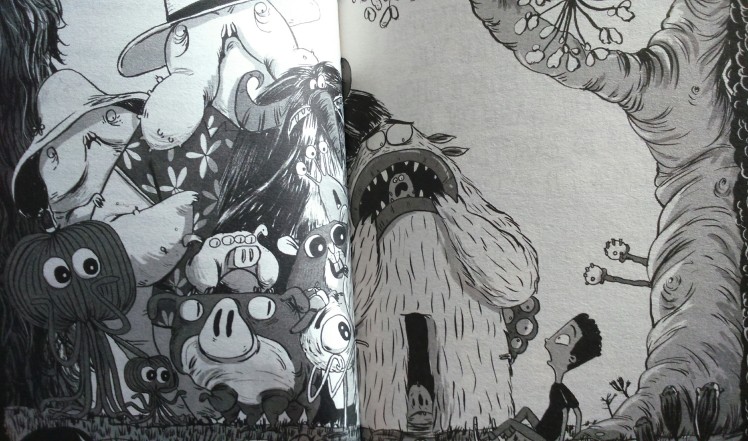 Soon Bob (who has a nice line in obsessive percentages) is being chased by the military (the wonderfully-named Killgrotty and his greenies) as he tries to find his house and his way home (yes, comparisons with The Wizard of Oz are apt!). Alternately aiding and hampering his efforts are an assortment of new companions. My favourite by far is Verity, the toga-wearing, ninja-kicking giant hamster:

Verity has a lot in common with Monstar, a character from Steve’s early reader books with Orion, to which my daughter is addicted. Both are bouncy, enthusiastic and prone to licking! There’s also a hilarious sequence where Verity attempts to drive a bus as a getaway vehicle, having never driven one before: 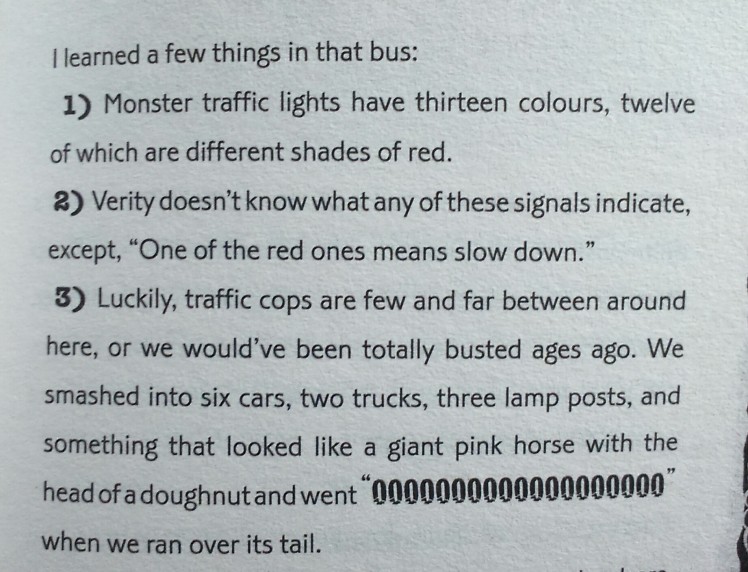 (You’ll be delighted to know that there is indeed an illustration of the giant pink horse with the head of a doughnut on the next page. But you’ll have to buy the book to see it 😉 )

Then there’s Zola, a gorgon (geddit?) who is somewhat of a disappointment to her gorgon family, being unable to turn anyone into stone. Instead, Zola is ‘artistic’ and uses her somewhat limited (but still useful) powers to turn monsters temporarily into works of art (the piece entitled ‘Toasted Soldiers’ made me snort my tea through my nose). Finally there’s Alfie Crudzilla, who’s also a disappointment to his family, being less interested in smashing things and more interested in a career in comedy. Less smash-up, more stand-up. See, I can do it too! (You may all politely applaud now.)

There’s a magic jewel that will enable Bob to get home, but of course it’s at the deepest level of Terra Monstra, and the journey there is fraught with dangers and – this being a Steve Cole book – toilet jokes. Including a sequence involving a giant bottom that has possibly traumatised me for life.

Jim Field’s illustrations are stunning, just as they were for the previous two in this sort-of-series (which began with Magic Ink and continued with Aliens Stink! Presumably another title ending in ‘ink’ proved elusive). In fact, though, this is visually my favourite so far; the illustrations and the font manipulation working so nicely together that I have half a mind to take STM in to my next meeting with OUP and say, ‘See this? This is what I want for Electrigirl!’

Story-wise, there are enough twists and turns and mad creations to keep any reader hooked, and the gags come thick and fast (yes, I did laugh out loud several times, all right? I’m not ashamed to admit it). As a grown-up, I missed the emotional punch of Aliens Stink! which I felt added an extra level of depth to Tim Gooseheart’s story, but that’s just me being picky. Oh, and I’d quite have liked a front cover that was a bit more…chase-like? With tunnels, or something. Or Bob and his pals. I dunno. But the BACK of the book is just awesome, and the B-movie font style for the title on the front is fab, and if that’s all I can find fault with, then really, you should all just go out and buy this book. Go on. Just don’t read the giant bottom sequence right before a meal.

Stop Those Monsters! is available from 4th June and is published by Simon & Schuster. A fourth book in the Magic Ink sequence is due out next year.