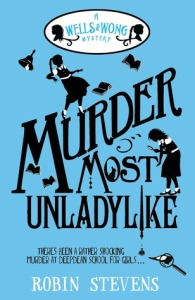 I’ve been meaning to read Murder Most Unladylike by Robin Stevens since it came out last July. I mean, just look at that cover. Stylish and retro and bright modern blue. And everyone kept saying how good it was, and I kept meaning to buy it and forgetting – and then last week I went round to Susie Day’s for a cuppa and a chat, and she said, ‘oh, do you want to borrow it?’ and as it happened, I’d JUST finished reading Eden (see previous review) and so I picked this one up, and…

Well, four days later, I’ve finished it. And that’s quite impressive for me, because my reading time is so squished these days that reading an entire book can take me anything up to a month. But when you’ve got a good ‘un (like the recent Anyone But Ivy Pocket, which DEMANDED that I read it until it was finished) you somehow make more time than you thought you had…

Anyway, it’s just as great as everyone said it was. If I had a minor quibble at all it would be that the plot doesn’t move quite as quickly as I’d like – but that’s because we spend a lot of time with our two protagonists, and because the book does have a real Agatha Christie feel to it. Christie’s books, which are long-term favourites of mine, specialise in two main tropes: a closed circle of suspects, and a Big Reveal at the end, involving all the main characters. Murder Most Unladylike follows these tropes very nicely, and as such,I couldn’t fail to like it!

The story is narrated by Hazel Wong, a Hong Kong Chinese girl at boarding school Deepdean. She is the secretary of the Detective Society, set up and run by Daisy Wells, archetypal English rose with what we might call ‘strong leadership skills’. To Daisy’s delight and Hazel’s horror, Hazel discovers the body of Miss Bell, one of the mistresses, in the school Gym. But when Hazel returns with reinforcements, the body has gone. Without a body, there is no evidence of murder – but where has it gone and who is responsible?

It’s very tricky doing this kind of book for the 8-12s age group (I tried it myself about eight years ago with an abandoned series called ‘Marian Trust Investigates’) because you have to get round the fact somehow that these are kids investigating murders. And in the ‘real world’, one knows perfectly well to leave this kind of thing to the police. But in a boarding school, which exists in a kind of bubble of its own rules and regulations, Daisy and Hazel can do things that they wouldn’t be able to do elsewhere. 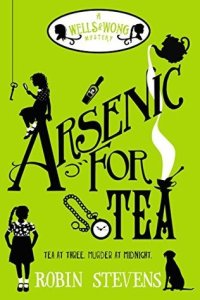 I love the old-fashioned feel of Deepdean: the San, tuck boxes, Lit Soc., bunbreak etc, all very nostalgic of St Clare’s or the Chalet School. Although of course these kinds of environments do still very much exist in current boarding schools: I used to teach in a boarding school where they very definitely still had ‘buns’ and ‘tuck shop’ and ‘prep’. And the hierarchy and pashes of the girls are nicely managed too. I was particularly impressed by the deft handling of Hazel’s nationality: being the only Chinese girl in the school means that Hazel is open to racism and bullying, but these aspects are subtly handled and not made an issue of. Indeed, the thing that most closely links her and Daisy is their intelligence.

Hazel and Daisy follow clues and hunt down alibis diligently. I appreciated the careful notes Hazel took, and the crossings-out when a suspect was eliminated (and then sometimes hastily added back in again when an alibi fell to pieces). I was delighted with the identity and motive of the murderer, which just goes to show that the book is extremely well plotted.

Murder Most Unladylike has just won the Waterstones children’s book prize and the primary category of the Oxfordshire Book Award, and is on several other shortlists, as far as I know. I’m delighted that there’s a resurgence in popularity in the detective/mystery genre for the 8-12s, and I shall be adding the sequel, Arsenic for Tea, to my To Read list – and eagerly awaiting future instalments of the Wells and Wong Mystery series!

One thought on “Murder Most Unladylike – review”