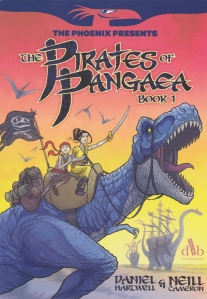 Dinosaurs carrying ships on their backs.

A strong, clever heroine who can tame a Tyrannosaurus Rex.

Put simply, how could The Pirates of Pangaea fail? Well, it couldn’t – and it doesn’t, because it’s a fantastic old-fashioned romp, with some stereotypically piratical language that made me laugh: “Lily-livered popinjay” being a particular favourite. If you’re going to read this book out loud, you have to do the accent. Even in your head, you have to do the accent. It’s impossible not to.

Our heroine is Sophie, who has been packed off by her parents to go and stay with her uncle (the governor) on the isle of Pangaea; a place where dinosaurs not only exist but are rendered docile by ‘snuff’ and used as kind of massive transportation. Sophie quickly makes friends with the bosun of the ship on which she is travelling and so we see Pangaea through her eyes. Luckily, Sophie is not a faint-hearted lass (see, even when writing the review I can’t help slipping into the language) and is impressed rather than terrified by the enormous creatures.

Unfortunately for Sophie, she is kidnapped and held hostage by a nasty pirate. The cabin boy, Kelsey, himself a reluctant crew member, helps her to escape and together they steal a pterodactyl (OH YES), along with another pirate, Ten Gun Jones, who is escaping for his own reasons.

With such a strong basic concept (Pirates! Dinosaurs!) you could be forgiven for thinking that the story doesn’t really matter all that much. But like any good adventure romp, the plot has to hold up to the weight of expectation, and not only does it do that with ease but the characters are larger than life and instantly accessible. Sophie is a likable and energetic heroine, with a sense of fearlessness and a confidence that stands her in good stead in many situations. (My only question about her is the length of her yellow dress, which shortens in later panels to knee-length. Much more practical for riding dinosaurs but no explanation of where the knee-to-ankle bit went.)

The illustrations are sumptuous, extremely detailed and with a love of colour washes that really appealed to me. There are pages in shades of blue, some very green sections, and a fiery red section towards the end with suitably terrifying dinosaur helmets.

Neill and Dan have done a fantastic job on this comic, and the book itself is really high quality, lovely thick paper that will stand up to many re-readings. My six-year-old daughter first saw Pirates in the Phoenix Comic (which, if you have kids aged 7-12, you really should know about because it’s brilliant) and so she grabbed this book from me when she saw it and eagerly read it cover-to-cover in two days. I can’t say she understood it all (I had to explain ‘smuggler’ and ‘tyrant’ among other words, though she didn’t ask about ‘snuff’!) but she loved the whole experience. I asked her which was her favourite bit and she said: ‘The end, when Sophie and Kelsey *********’ (I’ve had to leave that bit out, for obvious reasons). Her favourite two characters were Sophie and Kelsey, ‘And I’m not really sure about Ten Gun,’ she said, frowning. ‘Because sometimes he’s nice to them but then he does something bad’. This led to an interesting discussion on good people doing bad things and bad people doing good things…so as well as entertaining, you could say that Pirates is educational!

Pirates of Pangaea is out on 5th Feb and is a beautiful item to own or give as a gift. To boys AND girls. Of all ages.

And it SAYS Book 1 on the front, which makes me very hopeful that there will be a sequel for Sophie’s continuing adventures!

One thought on “The Pirates of Pangaea Book 1 – review”