I love reading kids’ stories. They don’t know the so-called ‘rules’ of storytelling: that each story should have a beginning, middle and end, that the hero/ine should face obstacles, that you ‘should’ use lots of descriptive language, that you should never start a sentence with ‘and’ or ‘but’. They just WRITE.

On Monday I returned the tent we’d borrowed for Wychwood to my friend Tess. Her daughter Charlotte is nearly six and has decided she would like to be a writer when she grows up. Today, Tess sent me a page of one of Charlotte’s stories: 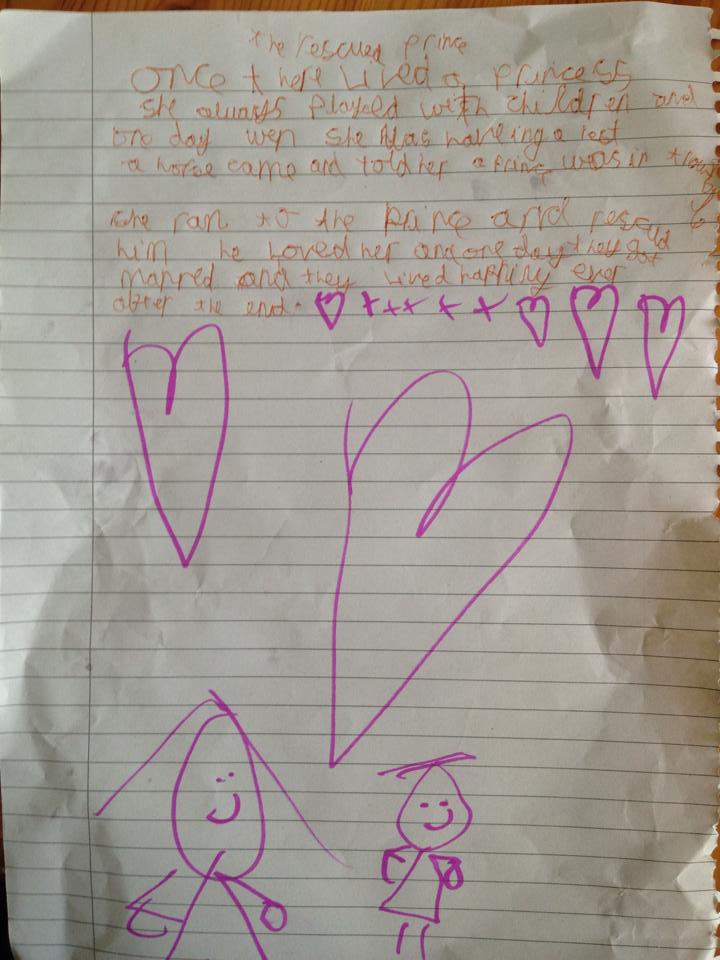 In case you can’t read it very well, it says this:

Once there lived a princess. She always played with children and one day when she was having a rest a horse came and told her a prince was in trouble.

She ran to the prince and rescued him. He loved her and one day they got married and they lived happily ever after.

Isn’t that great? I love the fact that the princess ‘played with children’ but obviously needed a rest now and then (because playing with children is very tiring for grown ups). Then a horse told her about the prince. A horse. No explanation of how or why this horse can talk; that doesn’t matter. Equally it’s irrelevant what kind of trouble the prince is in or what the princess has to do to rescue him. The important point is that SHE rescues HIM, not the other way about. And then he (naturally) falls in love with her (well, you would, wouldn’t you? She’s a rescuing princess, for goodness’ sake!) and they get married like in all good fairytales.

An aspiring writer sent me a message the other day and said she was having trouble writing a synopsis. She could do a lot worse than follow Charlotte’s style above – it’s sparse, efficient writing and it tells you exactly what happens in the story. Job done. Nuff said.

Charlotte is writing a series, by the way. She’s already decided on the titles of the books in the series. I look forward to seeing more from her!