I made this with my daughter the other day. She’d been collecting acorns and had found one with a little hole in. ‘Then I stuck my nail in and it made a keyhole!’ she said proudly. So I suggested we add a playdough top to it to make it into a fairy toadstool. Wonder what kind of a fairy would live in it? 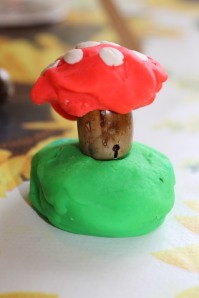 (A bit later, a little white worm crawled out of the hole of another acorn. My daughter was not impressed. Don’t think she’ll be collecting acorns in her cardigan pocket again!)